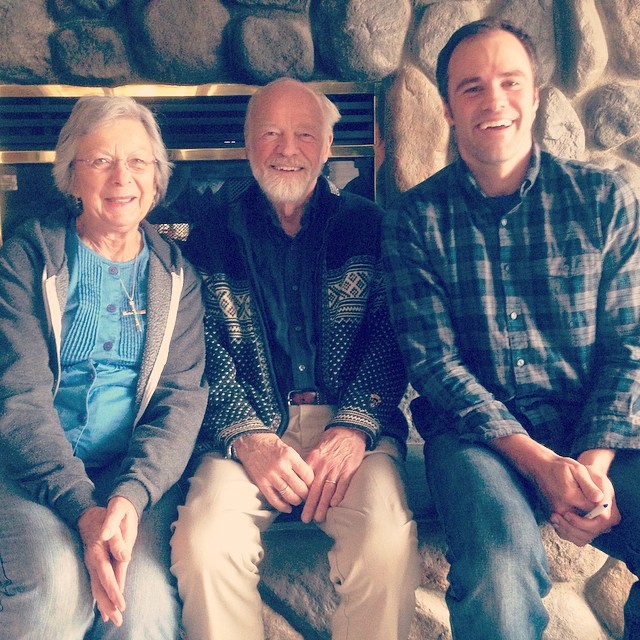 One sleepy Monday morning, I walked into a Goodwill Industries store. When I go I always have to scan the used book aisle to see if someone got rid of a gem, and that day was no different. A particular book on the shelf just wanted me to find it. It was the only one I could see.

I had never heard of it, but I saw Peterson’s name on the spine. I think that’s the guy who translated The Message Bible. So I grabbed it for $.99. When I say that book changed my life, I’m not exaggerating. I had seen my parents live the pastoral vocation beautifully in front of me, but I had never before seen it articulated like this on the page. The day I finished the book is the day I wrote a letter to thank this perfect stranger who was awakening in me a fresh imagination for my work.

But I didn’t know anything about Eugene—how old he was, what he was like, or where he lived. That meant I would need to send my letter to his publisher, which I did. “If you could get this to Mr. Peterson, I would be grateful. But if you can’t, I understand.” In my letter, I thanked him for his writing and asked him if I could spend a day with him discussing our shared vocation.

Truth be told, I expected that would be the end of it.

Then one day I came home from work. I went to the mailbox. Just like I did every other day. But this day was different because there it was, the white envelope—I have it sitting in front of me on the table as I type this—with my name handwritten in the most distinct cursive. You know, the cursive a grandparent uses because they were educated in a different era, and they cared about such things. That cursive. When I looked in the top left corner of my envelope, I saw “E Peterson, Lakeside, Montana.”

“Dear Daniel, Yes, I would be willing to spend a day with you here in Montana. But not so fast.”

But not so fast.

He went on: “I think it would be better if you spent some time thinking about what is involved. Why don’t you take some time to reflect on what ‘pastor’ exactly means to you. And what ‘church’ means to you. Write a couple of pages on each, pastor and church, and send them to me.”

As I’ve reflected over the last nine years of interacting with Eugene Peterson, I’ve come to think of those four words as some of the most important words ever spoken to me.

But not so fast.

Speed is one of the gods that reigns among the American pantheon. We want what we want, and we want it now. Get rich overnight. Lose weight overnight. Fix your ailing church overnight. You name it, the formula for fast is being sold by someone. Amazon Prime is the natural result of such a society, and I admit that I love Amazon Prime. But that impatience has seeped into the life of faith. We are in trouble when we start thinking a mature life in Christ comes quickly.

Eugene has become an icon of faithful presence in a world that runs on adrenaline.

Pastoral ministry is slow work. Pastoral work is inter-generational work, dedicating a young girl to the Lord one week and burying her great-grandparents the next. Pastoral work is work that takes a lifetime. Stay in one place for as long as the Lord will let you, pour your life into the people in front of you, and watch the Kingdom come. And when I get tempted to take shortcuts, I hear Eugene: not so fast.

The world we live in celebrates a lot of flashy things while hidden faithfulness is often overlooked. Eugene is a man who lived and wrote in virtual obscurity until The Message erupted onto the scene. “It only took Eugene Peterson 65 years to become an overnight success.” That’s what I’ve told all my friends. Have you ever heard of Bel Air, Maryland? Exactly. I hadn’t either until Eugene told me he pastored there for 29 years. His book A Long Obedience in the Same Direction has become the epigraph for his life and it has become the goal for many of his readers.

As one looks around the American landscape of local church ministry, it is difficult to find people who have been in it for the long haul, whose love for God and his church is still vibrant, whose familial relationships are still intact, and who are full of innocence and joy. Eugene and Jan Peterson are two people who meet this description.

Some people this week have been frustrated with Eugene for what they see as a sloppy interview and/or a muddled retraction. I can understand that. I’m guessing Eugene and his publicists were thinking this would be a routine interview for his final book before riding off into the sunset. But it wasn’t easy. And he’s slowing down. He’s almost 85. This is how life works, people.

Eugene has spent the last 60 years taking care of other people. Now it’s our turn to honor and take care of him.

Note: Feel free to subscribe to the blog and look for the second installment of the series coming soon.

One Reply to “Eugene and Me: What I Learned from the Man Behind The Message”